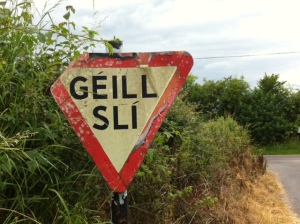 The Yield sign at the corner gets more and more battered but it never gets replaced. There should be a stop sign there not just a vague suggestion to look out three metres before the crossing road. I say the words Géill Slí out loud when I pass it but never when anyone else is with me.  I do not know how to say the words correctly in Irish even though I have been told many times.

The word EVENING can still mix me up.  Breda texted today to ask if I wanted to go for a walk this evening. I said yes and I looked forward to an evening walk.  I imagined a quiet walk in the hour or so before sunset.  The sun does not begin to go down until ten o’clock so I did not expect the walk to be mid-afternoon.  The word evening to me still means the time between afternoon and night.  Around here the word evening is anytime after lunch. I should know this by now.

The bees are walking.  I am not certain what kind of bees these bees are.  They are not bumblebees and they are not wasps. They are not yellow jackets. They are furry and more brown than yellow. They appear every day in the heat up in the corners in the ceiling of the high room.  I do not know if they are coming in or if they have a nest somewhere up there in the roof and they just crawl out into the room because of the heat.  Either way it is too high for me to try to find out.  They buzz around and smash into the windows.  Sometimes they go right out the windows but mostly they seem to be walking.  They come down to the floor and they waddle around.  I am nervous to walk without shoes.  The bees make no buzzing noises when they are walking. They just scurry along like some kind of beetle.  It is a quick walk for something that small. They could fly much faster.

I saw Tommie twice this week.  We had a chat in the hardware shop. He sat himself on a big bucket of paint while we talked.  He told me he cannot be away from the house for long as Margaret cannot be left alone. He says the indoor life does not suit him.  He said I am better in Open Spaces.  Catherine joined us for a few minutes.  She was pleased to see Tommie relaxing in conversation on the paint bucket. She reminded him of how he had once rescued her when she was a little girl.  She had been trapped underneath a pony named Tom.  They both laughed about Tommie rescuing her from Tom.  He was happy to be the hero of her story. Yesterday I delivered some fresh scones for him and Margaret. Tommie answered the door looking fragile and old.  His clothes are disheveled.  He is thinner than I have ever known him to be.  I think he is digging out old work clothes from years ago.  His belt is pulled tight but the trousers are still too large at the waist. Everything hangs off him. I have been worrying about Margaret who cannot see and can barely stand. Now it seems that Tommie himself is suffering.  Both physically and mentally there is a kind of visible defeat.  It is hard to be the one looking after someone else.  It is hard being the one who has to keep going no matter what.