A Crest of Moss

We walked around in wild, wild winds.  The wind has been blowing ferociously since last night. It feels like the wind has been blowing forever. We are not getting the heavy damage that they are getting in the west of the country. One tree fell down and across the road right near the corner where Tom Cooney has been stacking his timber from the cleared forest. An electrical or maybe a telephone wire was drooping too. As we passed, we hoped our own electricity had not gone.  Someone with a chain saw had already moved the tree off the road. The wind is a drying wind. It is drying the sodden land.  A little rain has fallen but mostly it is just wind endless wind noisy wind which is in our ears.  It is impossible to get away from the sound of the wind.  Along the way I found three blue tits. They were all dead. Three dead blue tits. Each of them was lying on his or her back with legs in the air. They did not have any visible wounds. I guess they were caught by the wind and blown along until they were smashed into something and died.  I moved each one to a sheltered spot on a rock or under a branch so they would not get stepped upon.

Simon went to the dentist. He had a wiggly tooth. The tooth was right in the middle on his bottom row of teeth.  It was making him feel nervous to bite. Daniel, the dentist, looked at it and told him that the tooth was barely holding on. He said it could fall out any minute.  He said it would be a pity to take it out or to let it fall out as it would leave an unsightly gap.  Daniel suggested that he attach the tooth to the strong tooth beside it in order to hold it in place.  So that is what he did. The top of Simon’s tooth is now cemented to the top front and the top back of the neighbouring tooth.  A space remains between the two teeth lower down to allow for little flossing brushes to slip in and out.  Everything has been thought of. 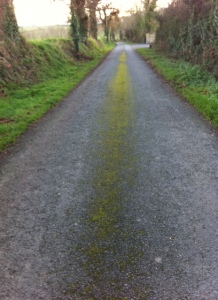 Rain was promised for the entire day and night.  I rushed out for a quick walk around the mass path, the road, the boreen and home.  I managed to do it all just before the deluge began.  As I raced along the road at speed trying to beat the rain, I did enjoy the smudge of bright green moss down the center of the road.  It is that place where the tyres never touch because we all drive down the middle of the road. Since I returned there has not been one minute since eleven o’clock this morning without rain lashing and wind roaring.  Fields were already flooded before this rain began. Roads were awash with big puddles. The water across the roads is bigger than puddles. It is lake-like.  The mud on the path and in the boreen has been deep and squishy all week. There will be more flooding. I do sometimes wonder why I live here. 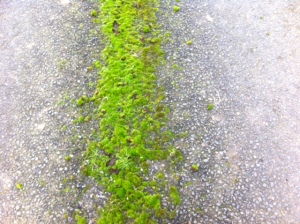 We met Peter and Rachel at 10 this morning for a walk to Molough Abbey and down into the valley to where the rivers Suir and the Nire meet.  It seemed a fine way to start the year. Simon mentioned that Edmund Spenser wrote about the rivers of Ireland in The Faerie Queene. Everything was familiar to us because we walk there often but in showing things to others, everything became new.  Each time I visit the Abbey, I seem to focus on different features. I like to point out the two places for the bells, one of which would ring the time in Rome while the other would ring the local time.  The two dogs, Milo and Betty, were not much interested in facts. They ran a lot and they sniffed a lot.  I have never had much fondness for tiny dogs.  And I have never known a dog named Betty. But I have become fond of Betty. Holding her in my arms is like holding a cat.  She weighs very little.  I have known heavier cats. I am not sure what kind of dog she is. She is light brown and disheveled looking. I think she is some kind of terrier. After seeing the end of the year newspapers full of memorable photographs of the year, with lots of attention given to the horrific and widespread destruction of Hurricane Ophelia, I felt like there should be a photo of brave little Betty.  She walked into a branch or a fallen thing the day after the storm and injured her eye.  She had to have the eye removed. The vet sewed up the place where it had been.  Being a one-eyed dog does not stop her from keeping up with Milo, nor does it dampen her enthusiasm for exploring.

In the autumn, the McCarras built a long narrow outdoor/indoor porch place on the side of the shop. There is a bench along one wall and some chairs and tables. It is a place for cyclists and walkers to go in and sit down for a rest and a drink and maybe something to eat. This is a popular spot with the cyclists.  Laurence told me that Nicolas Roche stopped by recently. Everyone in cycling knows Nicolas Roche.  Long distance cyclists often stop in the village before climbing up into the Knockmealdowns. The porch room is light and it provides a sitting place out of the rain or wind. Suddenly today there is a big round clock in there too. Catherine said the clock was a problem as it was just too bold for anywhere else so this is where it will stay for now.

There was another big wedding in the village yesterday.  Weddings often get scheduled near to Christmas when people have the time off so that families do not have to make a repeat trip to come home for the event. Once again, there were loads of summer frocks, bare legs, fake tans and strappy high-heeled sandals. Once again, it was far too cold for such flimsy clothing.  I knew that Treasa was going to be dancing later at the wedding party. It was her cousin getting married. She would be doing Irish dancing along with some others.  When she told me about it, I was reminded to ask her about Dancing on a Barrel.  I had been meaning to ask for ages.  Treasa came to fill in at the Post Office when Helen, the post mistress, went into hospital.  She took on the job for three months after finishing university, but she has now been there for a year, or more. She has played on a Gaelic football team, performed in a play and done Irish dancing professionally, all while working at the Post Office. She does not intend to be staying there forever. Earlier in the year she auditioned to represent Tipperary in the Rose of Tralee competition, but she did not win. She was disappointed as she felt she had done a grand job.  She had Danced on a Barrel for three minutes. The image of dancing on a barrel stayed in my head.  I could barely think about it as it seemed so dangerous. She explained that the barrel works as a percussion instrument.  The sound of  tapping shoes is amplified. She said that in the competition she got her heel stuck once on the edge of the barrel, but luckily she did not fall. She also said that sometimes the barrel is cut so that the top is only a few inches off the floor instead of being full barrel height off the floor.  There would be no dancing on the barrel at her cousins wedding.