The woman at the desk asked me: “What is your own name, so?” Anywhere else a person asking for my name would be enough. Your Own Name is a kind of double possession. A double descriptor which never fails to surprise me. It should not surprise me any longer but it does.

I was paying for my milk and newspaper when I felt eyes upon me. I looked to my left and there was Peggy, right beside me, and staring intently at me. The minute I turned towards her, she averted her head sharpish and marched across the shop to the magazines. She picked up a magazine and began flipping through pages rapidly. It was a teen magazine. Peggy has no children and she has no grandchildren. I am certain she has no interest in a teen magazine. It was obvious that she just grabbed the first thing that her hands touched. Peggy has not spoken to me for four or five years. The last time was a phone conversation when she rang and said that she did not want to fall out with me. We spoke on the phone for 45 minutes that day. We parted on good terms. Or I thought we parted on good terms. Since that day she refuses to salute if we pass one another in the car. She does not just fail to salute, she turns her head abruptly and looks away even if she is driving in a forward direction. It is a dangerous kind of head turning while operating a motor car, but she is making a point. In the last two years she has extended the snubbing to Simon. Her problem is with me and not with him, but he is now tainted by association. I wave and I greet her with a smile wherever and whenever we meet. This friendliness on my part has no effect. I have been told by another neighbour that Peggy fell out with the neighbour’s cousin over a jar of jam. That snubbing and feud lasted for twenty years. It only ended when the cousin died. 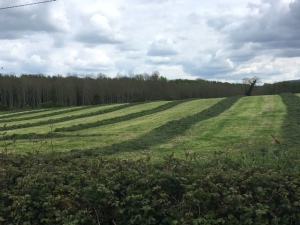 There have been thundering and thumping noises throughout the afternoon. All week there has been silage cutting. After it was cut the grass has been left to dry in piled up lengths through the fields. The fields looked like corduroy. Now machines are racing through the fields and picking up the piles and spitting them into huge trailers. The trailers are huge and blue and they are pulled by blue tractors that rush along beside the grass collecting machines. It is a dangerous time to be on the road or driving through the farmyard as the speed of the activity keeps everything moving at top speed. From here in our valley it sounds like planes on a runway. Sometimes it sounds like thunder. Sometimes it sounds like rumbling traffic from afar. The noises are a shocking change from the usual deep silence.

Ned painted his van. He painted it red. It already was red but he repainted it, just to brighten it up. He painted it with some red gloss paint from his shed and he used a paint brush. It is not well done. There are saggy bits where the paint was too heavy and it drooped in kind of sideways puddle. He did not do the small area around the letters on the back of the van because his brush was too big to get in between the letters. Around the chrome letters it is possible to see the old, not glossy red that was the previous colour. The van sat behind him at the Farmers Market as it always does. There was a lot of discussion of his van and his painting skills and not much of any attention paid to wooden bowls for sale on his tables. He got a lot of teasing but he did not seem to mind. I think he enjoyed it. 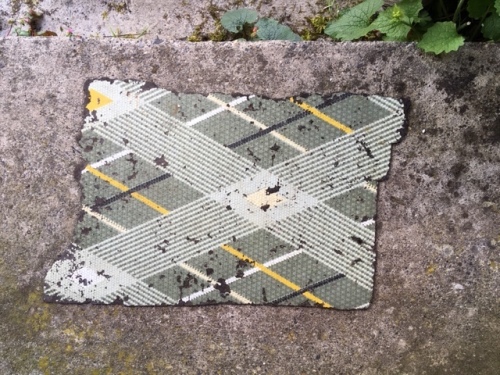 Pat flew to Paris on a mission. She went to Paris to buy herself a Hermès scarf. She spent nearly three hours in the store deciding which scarf to buy. She said that the staff were wonderful. She said they had nothing but patience. A friend went with her to help but he was not involved in the final choosing. That was her job alone. The friend stepped outside to have a cigarette break now and then. While smoking, he was able to keep track of the limousines and other fancy cars arriving at the shop. Most of the other customers were wealthy Asians and none of them were traveling alone. Maybe they were with family or perhaps they were with friends. The shop was spacious and well organised. The staff could manage all of the buyers and the entourages who came along with them. The scarf was Pat’s gift to herself for her 60th birthday. It was not a casual decision. It was a special, long-dreamed of and costly purchase. She wanted to get it right. It has been several weeks now but she has not worn the scarf yet. She opens the box on her kitchen table to admire it and to show it to friends. She unfolds the scarf and look at it spread out large. Then she folds it up again and puts it carefully back into the box. She is simply overjoyed to have it here in her house in Tipperary. She has invited me over for a viewing.

The rain bucketed down all night and well into this morning. This soaking is much needed by the farmers and much appreciated by me. It has been cleansing and cleansing is what we need. It is that time of year again. I do not know what causes it or who is the culprit. Is it one type of bird? Or is it all of the birds? Once again the house is covered with lashings of excrement. The car is covered with excrement. Every piece of washing that goes out to the clothesline gets hit. The birds must be flying extremely fast so every splash is long and diagonal and white. What are they eating to make such milky white liquid poop? How fast are they flying to make it all land with such splatter? And why does this last for a few weeks and then, as abruptly as it began, it stops. It just stops. Every year it is like this. It starts and then after about ten days or two weeks, it stops. I have theories about young birds and young digestive systems but these theories are not based on facts.

There is a fine looking triangle in the long field. The triangle was dug out and filled with gravel. I guess it is for drainage.

Election posters have appeared everywhere. I like the variety of suddenly having language in the landscape. The posters are tied onto trees, fences and telephone poles. Some of the posters have the words RECYCLED POSTER along the bottom edge. I assume this means that the candidate has run for office before. It does not look like a new head has been struck onto an old one. Almost every poster has a photograph of a head on it. That is how we know who is who. There are small mobile units with a poster on each side which get moved around the area. Just as we get used to seeing somebody’s face on the little tent device on a particular corner or stretch of road the whole display disappears and is driven off to another location. We might see it in a new place but we might not. We may not drive that way so we may never see it again. I love the element of surprise as these trailers move around the countryside.

The black and white farm cat ran across the path in front of me. She had something in her mouth. At first I thought it was a small rabbit. It might have been a shrew but it was big enough to be a rat. Whatever it was, it was not dead. It was struggling hard to be released.

Tom used to come to the Farmers Market every Saturday. He did not buy anything at the market but he stood around for an hour or more talking with the various people who had stalls or with the other people who were there for the shopping. He spent most of his time talking with Ned Lonergan who makes things out of wood. Ned makes fine bowls and egg cups and walking sticks from local timber. He and Tom would usually discuss where a tree had fallen recently and who Ned might have to approach to get access to some of the wood. Today we met Tom in the SuperValu car park. We talked for a few minutes and mentioned that we missed seeing him at the market. He said he had stopped going to the market because Eileen does not care to shop at the market. She thinks it is certain to be too dear and that it is a kind of exclusive affair altogether. She says that if you begin to buy from one person you will have to buy from everyone or else you will make enemies. She says the market itself is nothing but a problem and a way to be forced to spend money that you do not have anyway. Eileen never did come to the market for her shopping and Tom only came to meet people and to have some conversation. She has told Tom that it is not right to go there if he is not there to buy things. So now he does not go at all, but he wishes he did.

Tiny calves cluster together in the fields. They are so small that their legs wobble. Their legs are not yet strong. They tumble into one another. They seem too young to be away from their mothers. When Joe arrives with the teat trailer full of their formula they rush and jostle to get a suck. The once bright red teat trailer is now a faded pink. It looks like a miniature fairground carousel. With rubber teats.

It is the first day of May but the nights are still cold. It does not feel like May. I brought in several wheelbarrow loads of firewood just to be ready. I hope we do not need a fire in the evening but the probability is that we will need a fire. My new method for unloading the wheelbarrow is to wheel it right into the house. The old system of armloads or baskets or buckets full from the doorway seems silly now. I wish I had been doing it this way for years.