You Can’t Go Near It For The Weather. 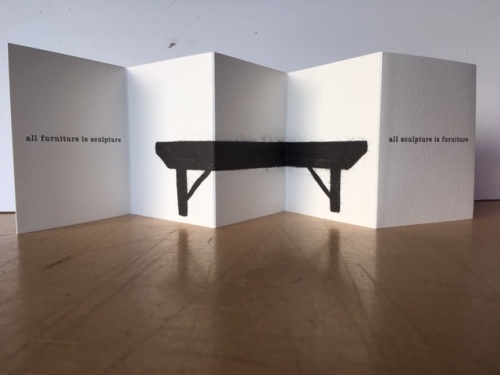 I found the dead mouse. Most of the stench had already evaporated. It was not the burning of the candle that eliminated the smell. It was the drying out of the corpse. I opened a box containing our small concertina After Brancusi. Dozens of enormous bluebottle flies came flying out smashing into my face and collecting all over my head. I rushed the box outside and the remaining flies flew away. The dead mouse was resting in a sorry clump on top of the little volumes. I could see that some of the contents would need to be thrown away. As would the box. Enough bodily fluids had escaped to render some things ruined. After the mouse was removed what could be rescued was rescued. And once free of the distraction of death, I enjoyed looking at my drawing of the bench which was my whole reason for opening the box in the first place.

I got a text announcing that a short film had been made about Frank’s shop in Grange. The shop has been closed for several years now. Frank became ill, and his son Shay ran it for a while, but then the family decided to just stop completely.  We none of us knew if it might be re-opened at a later date.  We hoped that it would be re-opened. We all miss Frank’s shop. The film about the shop was made by a grandson named Michael. There was a showing of the film in the Village Hall in October.  Unfortunately, I missed the viewing. I heard later that the Hall was completely packed out with family and friends. It was standing room only.  It was perfect for Frank and his wife to walk the very few steps from their house to the Hall. They were the stars of the evening. Today PJ sent me this link for the film.  I have already watched it four times. I wish it went on for longer.

It was dry enough this morning to spend time plucking figs. It is one of those jobs I have been meaning to do for the whole month of November. It was one of many jobs that we could not do because of the rain.  The excuse everyone repeats is that You Can’t Go Near It For The Weather. The fig leaves had already died and dried and fallen so the fruits were easily visible. The rule is to pick all of the figs except the ones that are the size of the smallest fingernail. The tiny tiny remaining figs will be the first ones to begin their growth in the spring. Because the morning was sharp and cold, I found that I was snapping the figs off rather than plucking them off the branches.

The woman told the man in the shop to Leave It Into The Bag. Leave is frequently used in place of the word Put.

Ned Shine arrived in the yard in his Hedge Cutter. The machine is always called the Hedge Cutter even though the hedges are always called ditches. Ned was cutting the ditches with his Hedge Cutter. He opened the door of the cab so that we could say hello to one another. His sheepdog was in the cab with him. I could not see the dog until the door was open because she was well below the level of the window. She was tucked in beside Ned’s feet. The dog’s face and my face were exactly across from one another.  I was standing on the ground and she was sitting in the cab. I have never seen this dog before.  I do not know her and she does not know me. That did not seem to matter. She began to lick my face as soon as the door opened. When she was finished licking me, I closed the door and Ned continued with his hedge cutting.

There is a dead mouse in my workroom. I cannot find it but I can smell it. The stench is bad. There are big fat flies looping about. These are the kind of flies that gather around death. It is probably best that I cannot find the corpse. It is too cold to leave the door open to get rid of the smell. I have been burning a scented candle that someone gave to me as a gift. It is the kind of gift that someone else gave to that someone. And that someone saved it until it was time to pass it on to someone else. No one wants this candle. It has a terrible smell all of its own. I liken it to a floral toilet cleaner. Who makes these candles? Who thinks they are a good idea? Who thinks they smell good? I lit the candle and headed out for a walk. Between the smell of the dead mouse and that of the stinky candle, it was impossible to stay in my room. 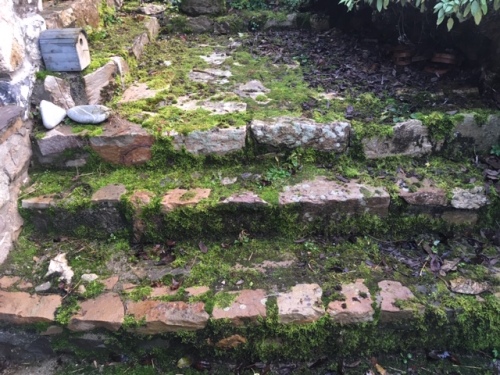 Everything is wet. It feels like it has been raining forever. Everything that is not wet and underwater is covered with moss. There is a mossy covering all over everything. The moss grows on rocks and hard surfaces. It loves the damp. It is bright green and cheerful but it is wet. Fields are flooded and there are sandbags all over the place. Everything everywhere underfoot is squishy and slippery. I cannot drive through the farmyard without mud and muck splashing all over the car. And I can neither get in nor out of the car without a special kind of push and leap movement. If I forget to do my leap I end up with a thick line of mud across the back of the right leg of my trousers. Everyday someone tells me that I have mud on my trousers. It is always a woman who tells me. It is always someone telling me nicely and quietly because they think that of course I will want to know. They are certain that I do not want to be out and about in town nor anywhere else with a big clump on mud on my trousers. I always say thank you and I act a little surprised to find that I have mud on my leg. I do not tell them that this is an every day event and that it is not just mud but it is mainly cow manure. It is a greenish brown kind of mud and manure mix because the cows are still eating grass and the color of the manure reflects that. The boreen goes right through the farmyard so I have no choice but to drive through the muck. And it does not matter how often I clean the side of the car the splash-up happens again the minute I drive through the yard. Soon the cows will be moved up onto their winter platform and they will not be crossing the road anymore. The ground will freeze so there will be less mud. I hardly dare to hope that this rain will stop.

There was a terrible noise of yelping and baying and barking. The hunt was in the valley. I am not a fan of the hunt. I dislike the advantage of the dressed-up people on horseback. The one who has the horn is called The Master. He is constantly bellowing and blowing and shouting to the dogs and to the other riders across the fields. I hate the fox being hounded out of his world and running for his life. At one point the noise of the dogs down by the stream got louder and louder. I could not stand it for another minute. It sounded like they had cornered the fox. I rushed down the path to shout at the dogs and to confuse them with a different command from a different human. I was running downhill as fast as I could on the rough ground wearing rubber boots. The ground was slippery with wet leaves and muddy grass. I nearly collided with the fox who was rushing uphill to escape the dogs. I do not know which of us was more startled. He turned abruptly and rushed back towards the dogs who were baying. They obviously thought they already had him cornered in some place that he had already slipped away from. The fox did not know that I was there to help him. He could not know that I was not trying to hurt him. I felt terrible. I had foiled his escape route and scared him even more. I felt better when I could tell by the dog sounds that they knew the fox had eluded them. He must have veered left and up into Joe’s field. After that the dogs continued their chaotic running in all directions. I chased them out of the yard each time they arrived until they finally disappeared up and into Donal’s fields.